I will dedicate the next few posts to variational inference methods as a way to organize my own understanding – this first one will be pretty basic.

The goal of variational inference is to approximate an intractable probability distribution,

, with a tractable one,

, in a way that makes them as ‘close’ as possible. Let’s unpack that statement a bit.

In order to minimize the KL divergence 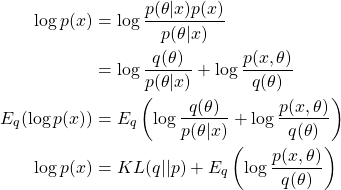 falls out of the expectation with respect to

. This is convenient because

and the model parameters

And because KL divergence is strictly nonnegative, the second term

is a lower bound for

, also known as the evidence lower bound (ELBO). In order to minimize the first term,

, it suffices to maximize the second.

One way to optimize over the choice of

is to consider the ELBO with respect some

, separating it from the expectation with respect to all other variables,

is the integral over all 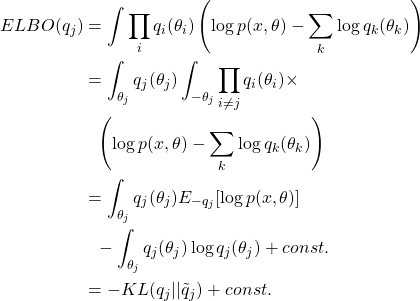 This motivates a particular updating scheme: iterate over the marginals

, maximizing the ELBO at each step with

These statements remain pretty general. We haven’t specified the functional form of

, but it will fall out of the

for specific models (a good, simple example is the normal-gamma model from Murphy’s MLAPP or Bishop’s PRML). This form will then define the variational parameters

, and the iterative algorithm will provide a way to compute them.

Some fun properties of the mean field approximation:

This begs the question, can you do better with richer

distributions? Yes! In future posts, I will take a look at some more complicated variational distributions and their performance.