The log marginal likelihood is a central object for Bayesian inference with latent variable models:

are latent variables, and

are parameters. Variational inference tackles this problem by approximating the posterior over

with a simpler density

. Often this density has a factored structure, for example. The approximating density is fit by maximizing a lower bound on the log marginal likelihood, or “evidence” (hence ELBO = evidence lower bound):

There are two steps for the Jensen’s approach to the ELBO. First, multiply and divide inside the integral by

, then apply Jensen’s inequality observing that the natural log is concave and that we now hav an expectation under

Alternatively, we could directly write down the KL divergence between

and the posterior over latent variables

Now let’s both add and subtract the log marginal likelihood

so we can wrap it in an expectation under

if we want. Let’s do that with the first one:

Now turn the first two terms into a single expectation under

and do the logarithm thing:

We know that K-L divergences have to be non-negative so that shows us we have a lower bound on the log marginal likelihood.

and observe that we can rearrange it to give us an expression for the marginal likelihood:

This is true for any choice of

. Siddhartha Chib has made some cool estimators using this trick, that I initially learned about from Iain Murray. Now let’s take the log of both sides and we’ll go on and stick the first two terms back together:

Remember, this is true for all

. Let’s add and subtract the log of an arbitrary density

Since this is true for all

, it’s also true in expectation under any distribution we want.

is a natural choice: 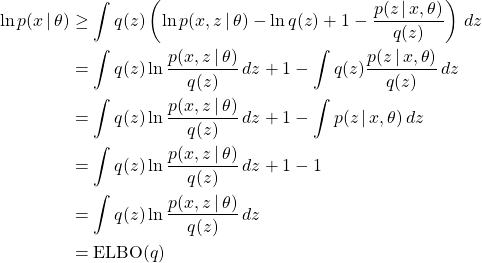