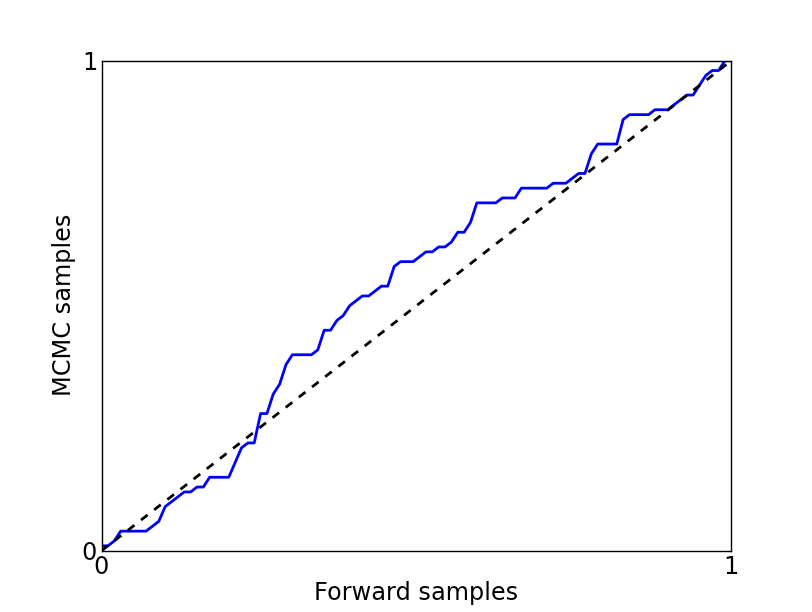 This is the second of two posts based on a testing tutorial I’m writing with David Duvenaud.

In my last post, I talked about checking the MCMC updates using unit tests. Most of the mistakes I’ve caught in my own code were ones I caught with unit tests. (Naturally, I have no idea about the ones I haven’t caught.) But no matter how thoroughly we unit test, there are still subtle bugs that slip through the cracks. Integration testing is a more global approach, and tests the overall behavior of the software, which depends on the interaction of multiple components.

The gold standard for testing MCMC algorithms is the Geweke test, as described in Geweke’s paper “Getting it right: joint distribution tests of posterior simulators.” [1] The basic idea is simple: suppose you have a generative model over parameters

, and you want to test an MCMC sampler for the posterior

. There are two different ways to sample from the joint distribution over

. Second, you can start from a forward sample, and run a Markov chain where you alternate between

Since each of these operations preserves the stationary distribution, each step of this chain is a perfect sample from the joint distribution

If your sampler is correct, then each of these two procedures should yield samples from exactly the same distribution. You can test this by comparing a variety of statistics of the samples, e.g. the mean of

, the maximum absolute value of

, and so on. No matter what statistics you choose, they should be indistinguishable between the two distributions.

In his paper, Geweke uses frequentist hypothesis tests to compare the distributions. This can be difficult, however, since you’d need to account for dependencies between the samples in order to determine significance. A simpler approach is to make a P-P plot of the statistics. If it’s very close to a straight line, the test “passes”: If the results are noisy and unclear, generate more forward samples and run the chains for longer: (While these figures are synthetic, they’re representative of outputs I’ve gotten in the past.) If you wind up with the third case, and you can’t run the sampler any longer because it’s already too slow, try reducing the number of data points. Not only does this speed up each iteration, but it also makes the chains mix faster — the more data points there are, the stronger the coupling between

There’s a major drawback of the Geweke test, unfortunately: it gives you no indication of where the bug might be. All you can do is keep staring at your code till you find the bug. Therefore, there’s no point in running this test until all your unit tests already pass. This meshes with the general test-driven development methodology, where you get your unit tests to pass before the integration tests.