As the title of the post suggests, this week I will discuss a geometric intuition for Markov’s inequality, which for a nonnegative random variable,

This is a simple result in basic probability that still felt surprising every time I used it… until very recently. (Warning: Basic measure theoretic probability lies ahead. These notes look like they provide sufficient background if this post is confusing and you are sufficiently motivated!)

I used to get intuition for Markov’s inequality from the fairly intuitive proof (or the equivalent proof with integrals), 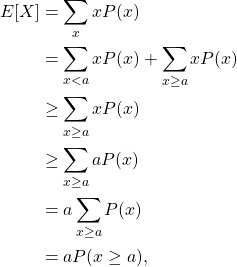 which is all well and good, but I like pictures and don’t feel like I have really internalized a concept unless I have a representative picture for it in my mind. The problem is then, what is the picture here? Expectations are averages, so when you look at the value of

is always measurable, so we can write

The key is then that

is essentially just the area under the random variable

. We can then understand Markov’s inequality from the following (slightly simplified) picture: The dashed line is at the height

, so the probability that

that map to values of

(the line segment shown in the picture). The area of the shaded box is thus

, which is clearly less than the entire area under